Dalgety Bay the MOD is unable to locate records about the sale of radioactively contaminated land and the local Community Council appeals to the public for their help. 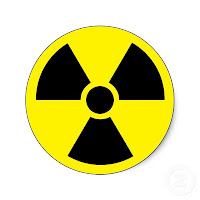 See the item of 3 October for details of what has prompted this reply
The Chairman writes: A reply from Moray Estates indicates that "They being professionally advised, could equally assume that had clear and accurate information been passed over relating to the exact nature and content of the salvage area in question then, it would be unlikely the Estate would have completed the purchase".

On this reply PLEASE NOTE THAT IF ANYBODY IN THE LOCAL AREA HAS KNOWLEDGE OF ANY OPERATIONS PARTICULARY IN RESPECT OF DONIBRISTLE AIRFIELD ON INCINERATION, DUMPING OF MATERIAL OR OTHER WORKS IN RELATION TO THE FORESHORE IN DALGETY BAY DURING THE 1950'S AND 1960'S, PLEASE CONTACT THE CHAIRMAN cmcphail.oceanwheels@btinternet.com or tel  01383 823750.

YOU MAY HAVE IMPORTANT INFORMATION WE CAN SEND TO THE MOD AND SEPA."

Thank you for your letter of the 6 August 2012. I can confirm that a copy was forwarded to the Rt Hon Andrew Robathan, whilst he was still the Minister for Defence Pensions, Welfare and Veterans, as you requested. Please accept my apologies for the delay in confirming this and for replying to your letter.

As you will be aware we are now in the process of finalising arrangements to commence Stage 2 of the Investigation Plan and hope to have everything agreed ready to start in October. This will include engaging with residents, and I would like to thank you for your offer of assistance. I understand that my officials have already been in touch in this regard.

With regard to the sale of the former RNAS Donibristle, it is unfortunate that  we have not been able to establish the exact details of the documentation which was provided as part of the sale. We cannot therefore, comment on whether or not the information in question was passed across. What is certain is that we would have complied with the practice and legal requirements of the day. Given the fact that the salvage section was still present at the time of sale, combined with the breadth of the proposal put forward by the Moray Estates Development Company in respect of the site, it would seem fair to assume that they had a detailed knowledge of the site before committing to its purchase.

Returning to the Investigation Plan, we remain committed to delivering the investigation in order to assist SEPA to determine the nature and extent of the problem and what needs to be done to ensure the protection of the local community.

Again, please accept my apologies for the delay in responding.


The letter makes it clear that the MOD assumed that it would seem fair to assume that the Moray Estates Development Company had a detailed knowledge of the site before committing to its purchase. This is clearly an attempt to shift liability away from the MOD onto the Moray Estates Development Company.   The MOD has not given in the letter any evidence to back up this assumption. It also calls into question how many other situations there are, where the MOD has sold land  making the same assumption.

WHAT CAN YOU DO?

You can sign our official UK Goverment e-petition, and you can join our email campaign. Please do both! Urge everyone you meet to do the same

"I respectfully ask the Ministry of Defence and Scottish Environment Protection Agency to state that remedial work on the contaminated foreshore area in Dalgety Bay will begin immediately after the investigation plan is satisfactorily completed and that those deemed responsible for the contamination will fund the work and have it completed by the end of 2013"
Posted by Fred Dawson at 11:44 No comments:

DU Firing programme at Eskmeals - As Low As reasonably Practical ?

Looking back to the UK depleted uranium firing programme and in particular the firings carried out Eskmeals on the west Cumbrian coast. It is interesting to consider to what extent these firing complied with the duty to restrict exposures to as low as level as reasonably practical (ALARP).

The  IRR99 and the IRR85 requires employers to keep exposure to ionising radiation as low as reasonably practicable.

VJ Battery at Eskemals in the early years was essentially a traditional open butt with the addition of a roof and extract ventilation from each side of the butt. this allowed the spray back of aerosolised DU and fragements through the open air onto a apron in front of the butt.

To quote from the reports :-

Report summarising the measurements taken at VJ Butt P&EE Eskmeals of Depleted Uranium in air during the period 1981 to 1982.

"The penetrator on impacting with the target produced pyrophoric fragments which rapidly disintegrate and. there is a spray back-up the range over an angle of 20 degrees  for a distance of 60 metres."

"Total activity in air measurements taken outside the butt indicate that DU is being released to the environment at levels above the DAC for a period of time after firing. It is not possible to quantify the amounts.".   DAC "Derived Air Concentration" ICRP 30

"The DU dust was found to be well within the respirable size range, dust particles of this size have very long settling times and can remain airborne  for very long periods of time and if allowed to disperse from the butt may travel many hundreds of meters."

This is the  Department of Defense Superbox DU firing facility at Aberdeen Proving Ground Maryland USA. As can be seen the facility offers almost complete containment. It includes a flight tunnel with a drop down door.  The Superbox facility is seen as an example of a facility that reduces exposures to the public and workers outside the facility to a level that is  ALARP 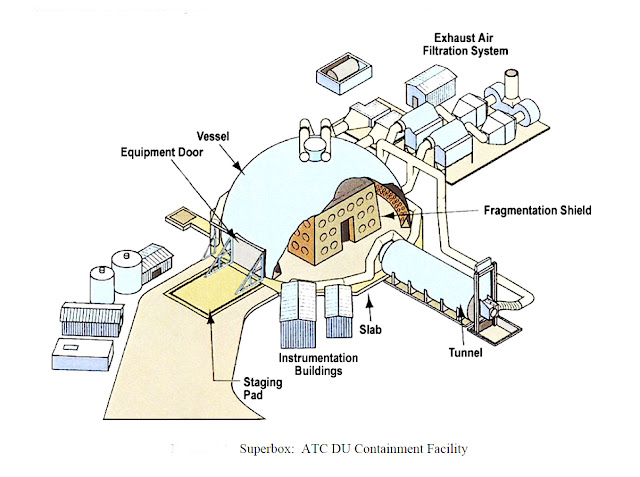 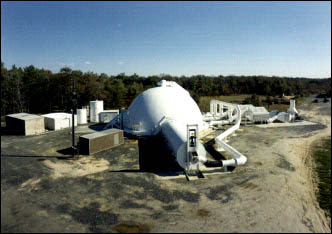 The conclusion is that  that in the early years of the firing programme the MOD failed to meet its legal duty to restrict exposures to as low as level as reasonably practical. It is also interesting to consider that that the VJ Battery at Eskmeals was probably very quick and cheap to build compared to the Superbox facility in the USA.

It is now also clear that the MOD failed to seek letters of agreement from the Environment Agency for the discharge of DU to atmosphere from VJ Battery at Eskmeals. This was in breach of the MODs' own policies.

Later years of the firing programme at Eskmeals

DRPS Report "Comparison of Kirkcudbright and Eskmeals Environmental Monitoring Data with Generalised Derived Limits for Uranium" June 2002 mentions that a tunnel was added to the face of VJ Butt in order to reduce discharges of DU to the environment. This acknowledged that the original firings at VJ did not comply with the requirement to restrict exposures to as low as level as reasonably practical.

In response to a FOI request the MOD has released some of the minutes of the Radiation Protection Technical Advisory Committee (RAPTAC).

This is the main Committee concerned with ionising radiation protection. The papers provide an insight in the issues of concern to MOD Officials in the late 1970s and early 1980s.

It is notable that the MOD have only provided 3 sets of minutes not the 10 requested..

Issues of note include :

We are treating your correspondence as a request for information under the Freedom of Information Act 2000. We have now completed an extensive search of archives for the information you requested and we have located the following documents.

We have provided all the information that we could locate for you. These documents have been assessed under the Freedom of Information Act 2000 and personal information has been redacted under the Absolute Exemption Section 40.
Posted by Milcon Research and Consulting at 21:22 No comments:

Unregulated discharge of Depleted Uranium to the environment


Thank you for your enquiry dated 21 September 2012. This has been dealt with under the Freedom of Information (FOI) Act 2000.

"I am writing to advise you that the information you requested is not held.  There is no licensing as such of the Ministry of Defence's depleted uranium firing activities. The  procedure adopted at the outset of the depleted uranium trials programme, which is still in force, is  for regulatory authorities with Health and Safety and Environmental Protection responsibilities to  be involved in the design of the safety arrangements and to visit the sites as and when they wish."

In the case of Kirkcudbright some 6,907 shells have been fired into the Solway Hansard and  there appears to be no accurate figures for the amount of DU dispersed to the environment at Eskmeals.

JSP 392 Vol 2,  Leaflet 30  "DEPLETED URANIUM" states that there are so far as the Radioactive Substances Act 1993 (RSA93)  is concerned there are parallel arrangements, this being the case there should be letters of agreement from the environmental regulators for the discharge of depleted uranium to the environment.  The response to the FOI request shows that none were obtained  and the discharges were unregulated.

It may be that the MOD felt that it would be pointless to seek letters of agreement form the environmental Regulators as they were unlikely to agree to the discharges and so far as the MOD were concerned it was fortunate that the RSA93 does not apply to the MOD.

The response to this FOI request clearly shows the MOD failed to meet its own policy to seek letters of agreement from the environmental  Regulators  when discharging substantial quantities of radioactive substances into the environment.


"3 In addition to the general requirements of the Health and Safety at Work etc Act 1974 and the
Management of Health and Safety at Work Regulations 1999, the following specific legislation applies
directly or is applied indirectly through parallel arrangements designed to achieve equivalent standards:
• Ionising Radiations Regulations 1999 (IRR99) (apply directly).
• Radioactive Substances Act 1993 (RSA93) (parallel arrangements)"

MOU between the MOD and Environment Agency

The MOD was asked through a FOI request to provide information about loss of specialist capabilities needed to support the nuclear propulsion programme and to explore what the Union Prospect was doing to resolve the issue.

Thank you for your email of 28 August 2012 requesting the following information:

Letters and emails between MOD Officials and the Union Prospect concerning the loss of specialist capabilities needed to support the nuclear propulsion programme and the Frame work Agreement Technical Services for the period January 2012 to June 2012.

I am writing to advise you that we are still working to identify the information that falls within the scope of your request.  I estimate that it will take a further 20 working days to identify this information, so I will write to you again no later than 23 October 2012.  Please accept my apologies for the delay, and for not providing a response within the 20 working days set out in the FOI Act."